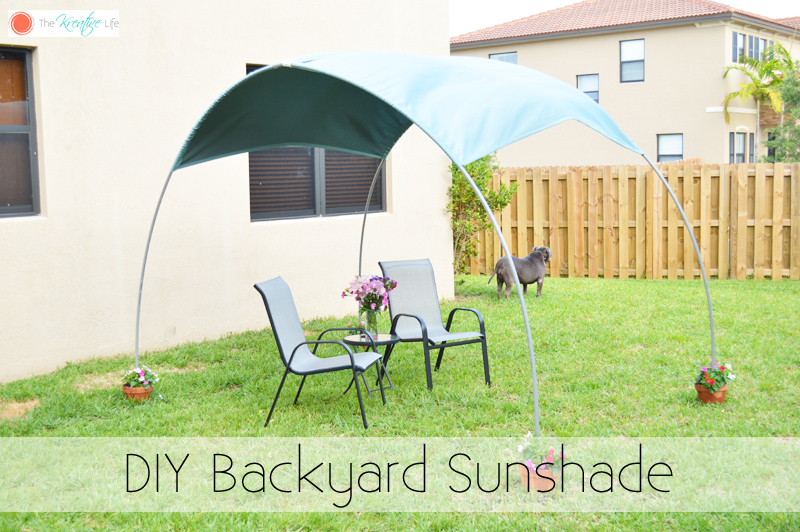 I made this diy pvc canopy because my mom has visited us three times since we moved to Miami and everytime she came she complained that there was no place for her to sit in the backyard in the shade so she could drink her morning coffee or watch the kids play.

At our house in Colorado, she had the same issue with no seating, so I had to make her a little deck furniture set because at the time I didn’t know how to make a backyard pvc canopy.

I completely understand where she’s coming from because if you’ve ever been to southern Florida, then you know it can easily be a very humid 80° at nine in the morning.

That’s no bueno, so I definitely had to figure how to make backyard shade!

I know that my mom likes sitting outside, but she always comes in pretty fast just because the sun would beam down on her.

is my best friend.

Luckily, she has a daughter who is a Miami diy blogger and can come up with ideas in a heartbeat.

and need to save for that.

I also wanted something that looked a little better than the last set I made for her. It wasn’t long before I figured out how to make a sunshade.

Here is my diy pvc canopy that completely blocks the sun for her and now she can watch the kids play without having to rush inside.

It only took about an hour to complete and it turned out better than expected. Enjoy! 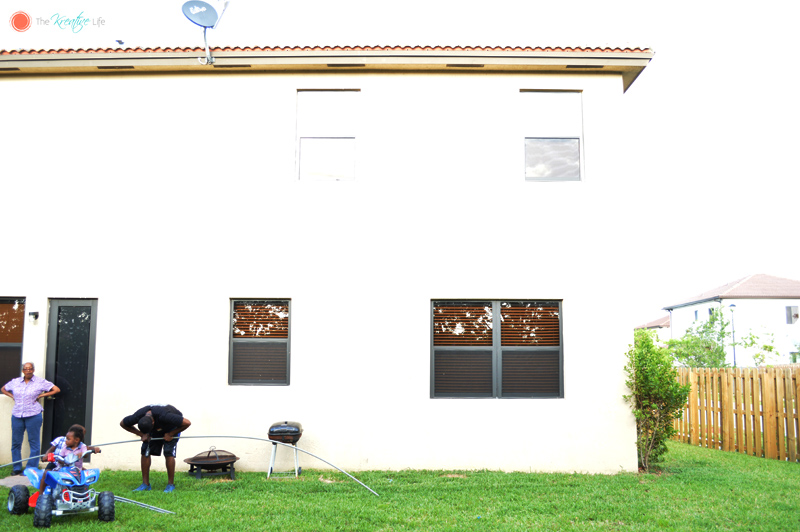 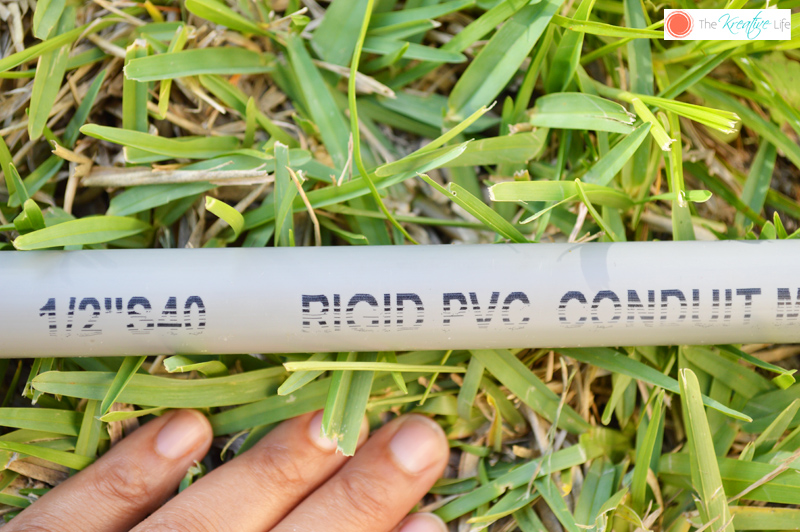 How To Make a PVC Canopy

I had to decide how wide and long the diy sunshade would be.

Once that was figured out, my husband placed the rebar into the ground according to where the ends of the full length pvc would sit.

He said that I would take all of the credit for putting it up and wouldn’t include him in this post. He was wrong and here is proof that he did help out. 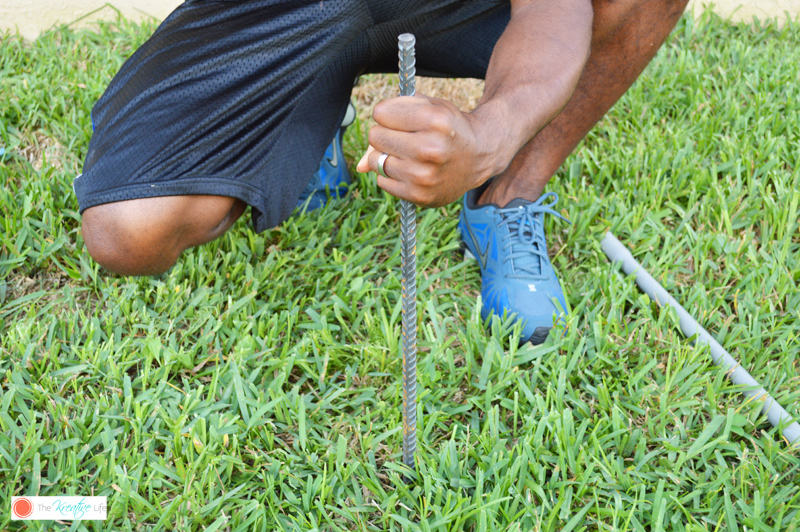 The rebar is used to support the pvc pipe sunshade.

The full length pvc has a male and female end and initially I stuck two of them together to make one arch, but it wasn’t sturdy enough going across and the arches were bending to the sides. 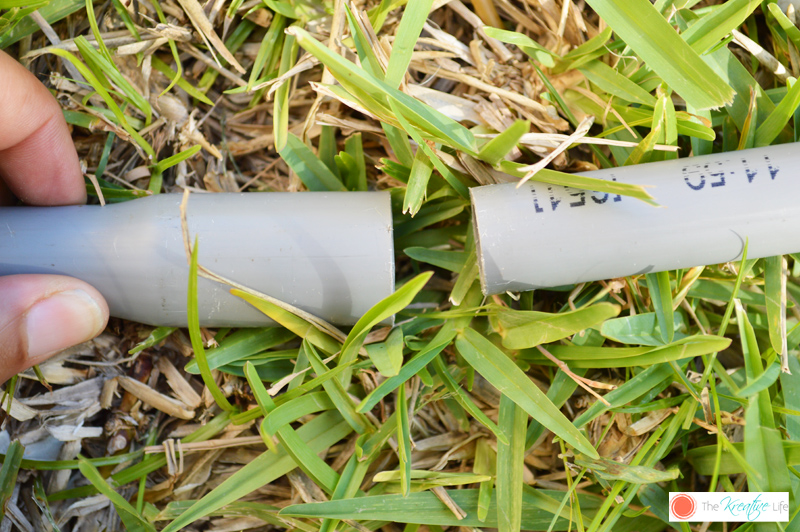 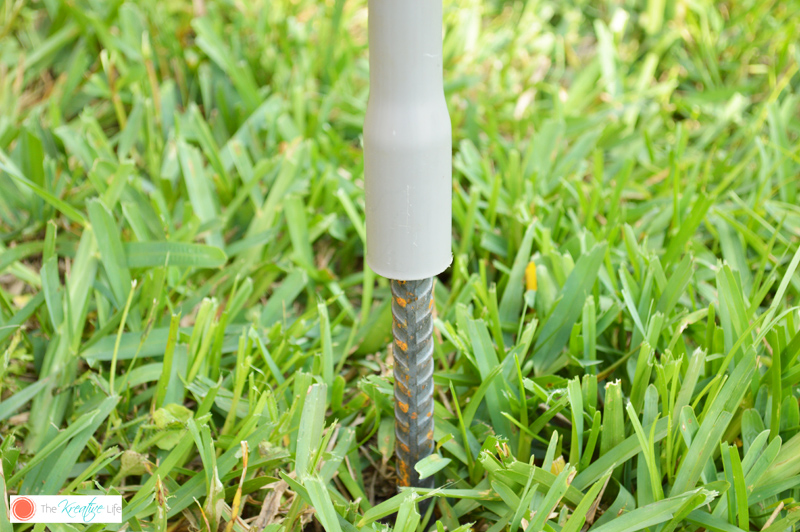 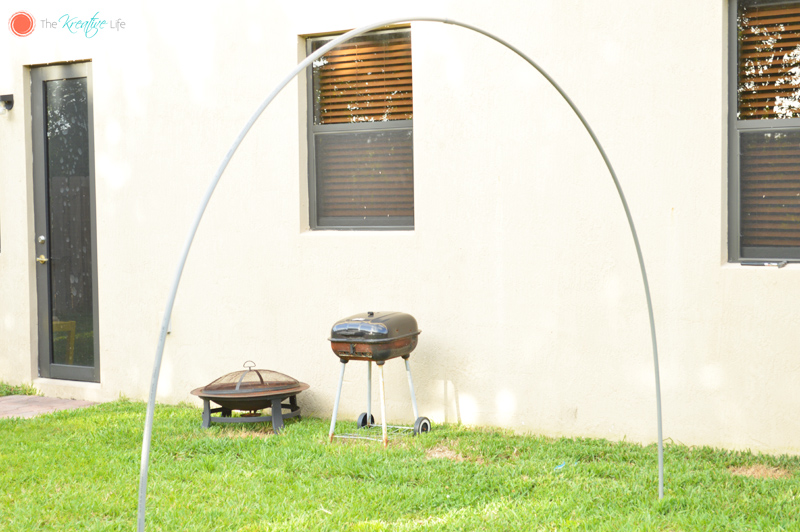 was placed onto the male ends and the cut pvc was used as the support beam to attach the two arches of the easy diy canopy. 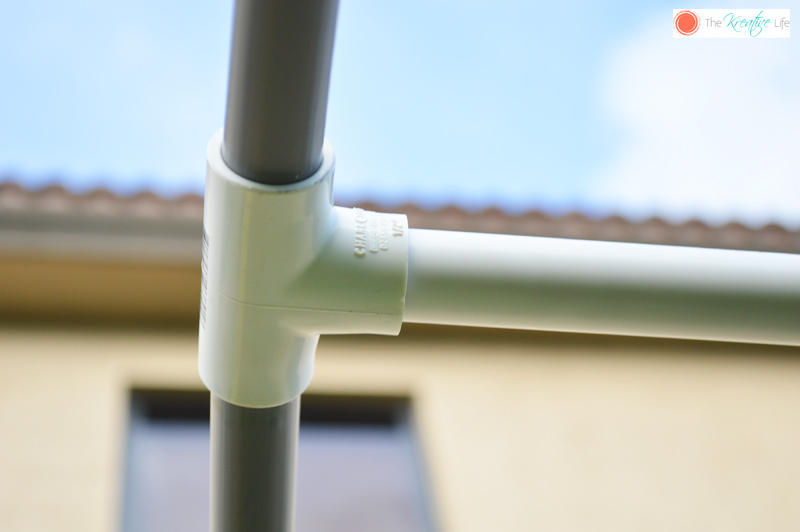 After we perfected the sturdiness of the arch, we used curtains as the shade. At first, I used outdoor fabric

, but it was way too heavy. It was my husband’s idea to use the curtains.

They’re not weather-proof, but since the pvc slides easily off of the rebar, the curtains can be removed during bad weather or replaced if damaged.

The curtains also saved time because I didn’t have to do any sewing because the seams were already there. Bonus!

(Update: I just found out about shade cloth

, so I think I’ll go get some of that to use instead of curtains. I’ll share pics when I switch it out.)

The curtains can slide up and down the pvc, so it can track the sun and keep my mom in the shade. 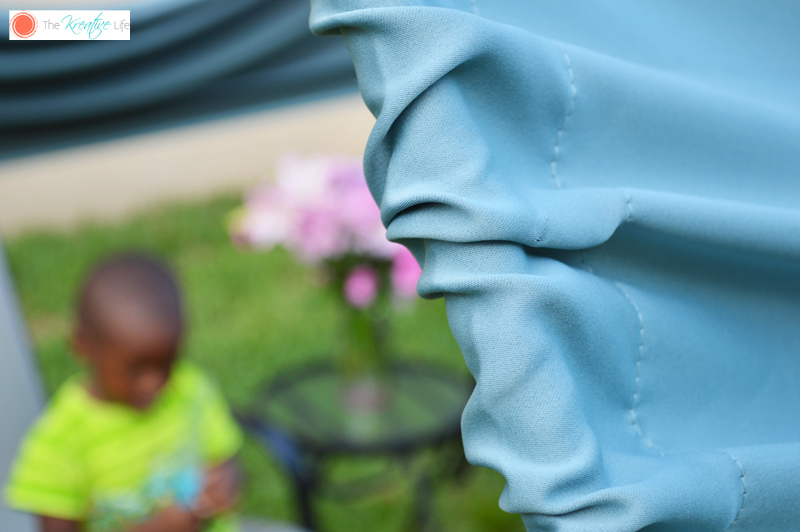 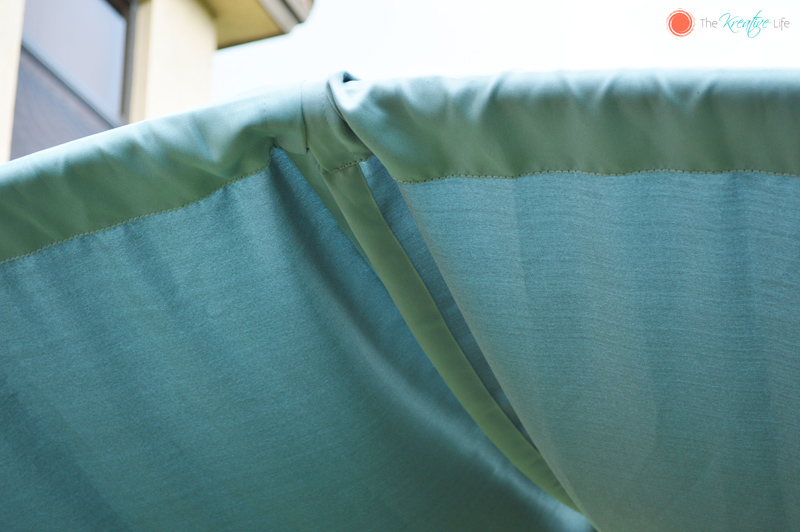 I had to add a touch of beauty for my momma, so I took the pvc off the rebar and slid the terra cotta pots

over the rebar. Then I put the pvc back onto the rebar. 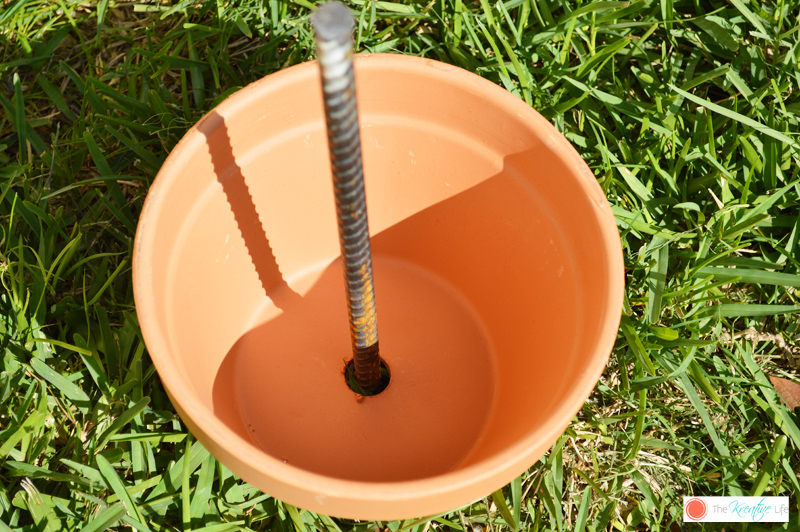 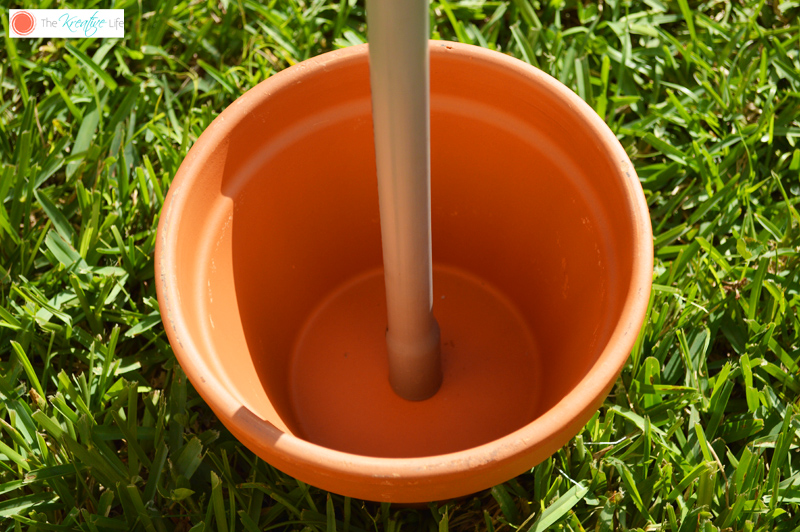 All I had left to do was add a little soil and flowers to the pot and voila!

My mom has her own little diy backyard canopy in the shade to enjoy. 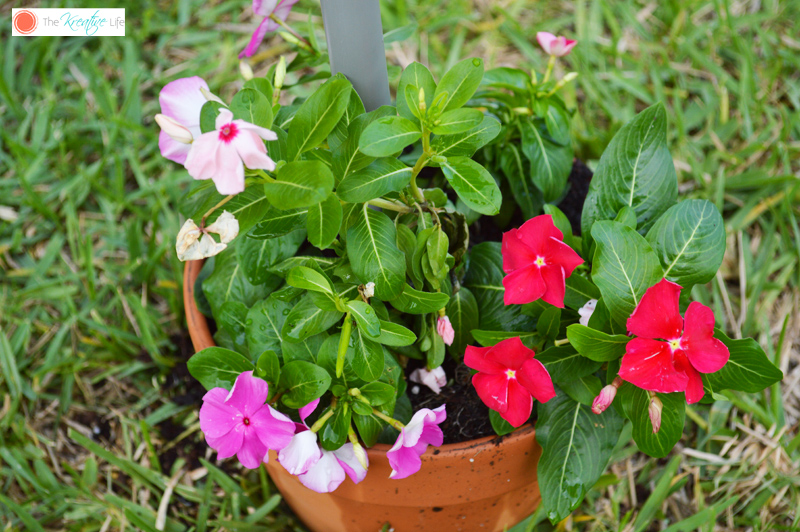 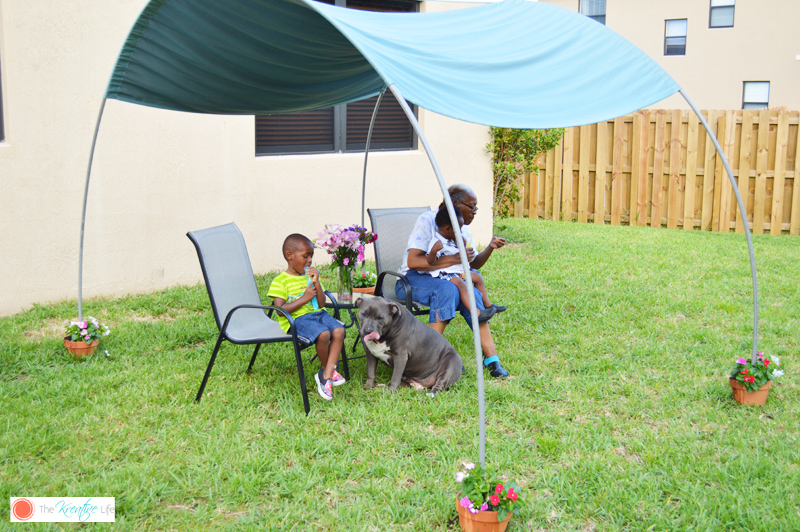 What are some creative ways that you stay out of sun and keep cool when you’re outside? 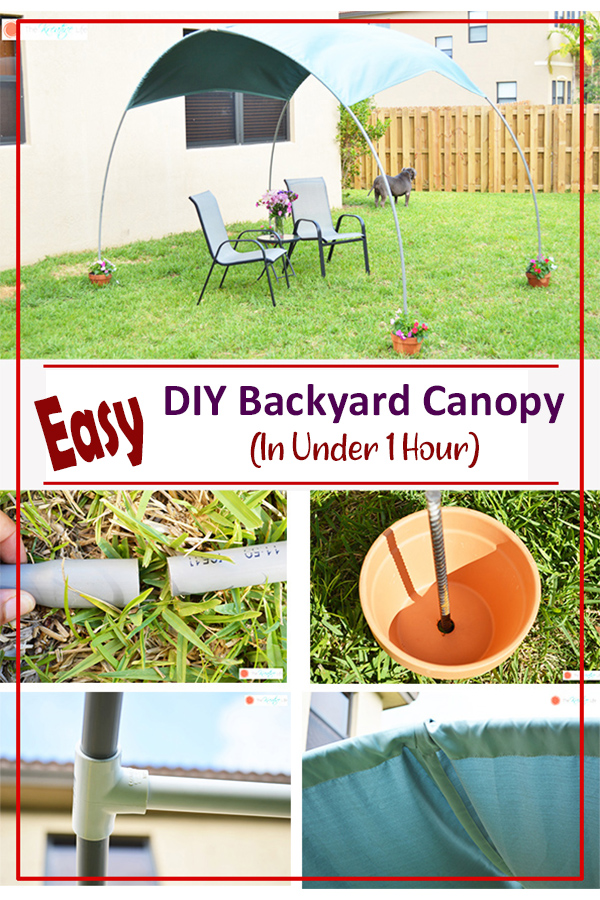